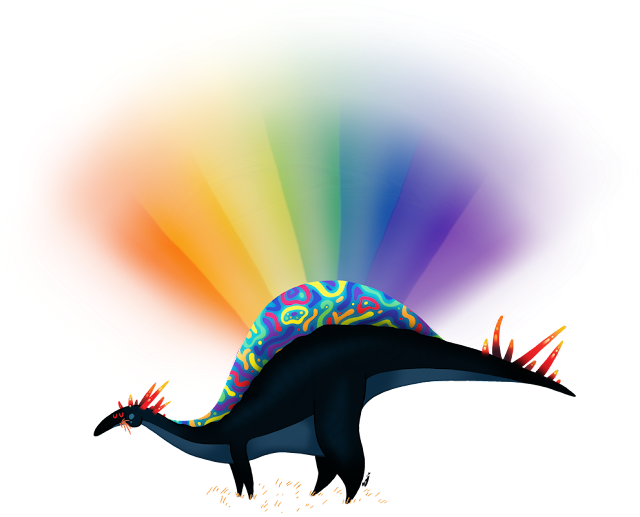 The Prismasaurus is one of those creatures that sounds funny at first. It may be a big dinosaur, taller than a man at the shoulder, but it's still a big dumb animal with a rainbow on its back. Then you're blinded, set on fire, driven insane and sent into another dimension. It's less funny after that.

The Prismasaurus is an epic-level creature, which means that it's the kind of thing you need a +5 vorpal sword to hope to penetrate its ridiculous diamond-hard skin. Its back has a crystalline ridge that reflects all light back as a rainbow of the prismatic spray variety. This rainbow is also blinding, helps neutralize spells and surrounds in a confusing swirl of colours and light that make it difficult to take aim. Fortunately, this only affects creatures within a certain range of it, so maybe you should exchange the vorpal sword for a really really strong ballista.

Or dig a hole that it can fall into and starve to death. Bam, level 1 party defeats CR 28 creature with shovels, a lot of time and some camouflaging twigs.

The actual illustration of the Prismasaurus in the Epic Level Handbook is a little bit ehhhh in my opinion. The idea of a rainbow dinosaur is pretty ludicrous to begin with, but the illustration in the book is a bit dull. It's literally a brown iguanodontian dinosaur with a little streak of color going down its back. The miniature of this creature actually looks better than the illustration, though it keeps quite close to the drawing, if only by putting some emphasis on the colour of its back.
Posted by Blanca Martinez de Rituerto at 13:31