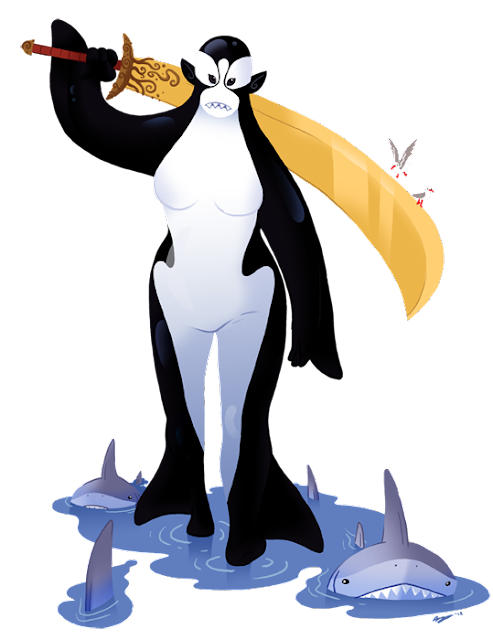 The Ocean Strider is a sea-bound guardian. They appear as 20-foot tall humanoids with rubbery orca-like skins that walk on the surface of the water. The very sight of this black and white colossus walking towards your boat, wreathed in fog and flanked by dire sharks, whales and giant quid is enough to strike fear into the scurviest of sea dogs.

It's a little unclear whether the protection they give their spot of the ocean is altruistic or fierce territoriality. What are you doing on my property, and all that business. Any creature that doesn't belong is that part of the ocean is quickly seen to. So any boats that have the misfortune of being there can expect some kind of encounter with these guys. Fortunately, the promise to keep fishing to a minimum, avoid dumping, and getting out as soon as possible is all they ask. But if you try to fight them or sail by, you can look forward to terrible weather, attacks by elementals, having your ship sunk and your crew eaten by sea creatures. Also they reeeeally don't like anyone who wants to plunder the ocean depths.

I really like orcas. They're one of the more striking sea-mammals, thanks to their monochromatic markings. I also really like fey, the balance between nature protector and tricky little jerk. So obviously I really like this creature.

However, the stat block is kinda confusing. So they're Huge sized creatures, yes? Then why do they only have 19 STR? I know that Ocean Strider's are fey, which are always more about trickiness than brute strength, but this is a fey that's half killer whale and it likes to sink ships. For reference, an orca as statted out in the books has 27 STR. The description says they normally wear mithril armor, but that's not taken into account in the AC. They wield Gargatuan weapons, but I don't think the numbers are quite right (doesn't a Gargantuan falchion deal 4d6, not 2d8 damage?). And their CR is 18, but they seem a little too weak for that. I guess they get a couple of CR points for the extra damage they can do with their summoning spells and the fact that if they get you in the water, that's probably gonna be it for you. I don't know if I'm just misunderstanding the stat block though. I still like this creature though.
Posted by Blanca Martinez de Rituerto at 11:55