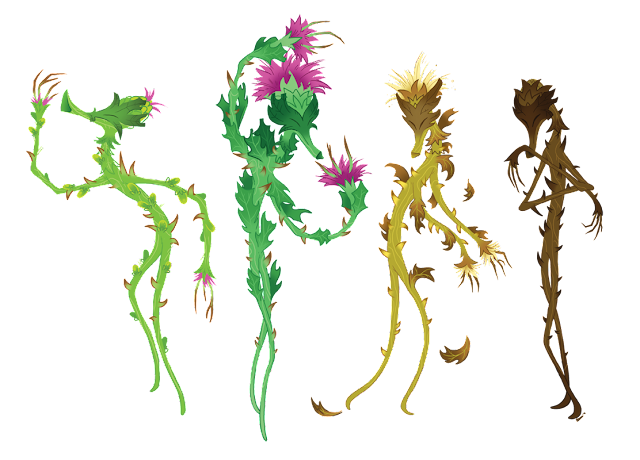 The Needlefolk are a race of sentient plants. They're not especially intelligent, but have good problem-solving skills and ambush tactics. However, they do not form societies. They live as individuals, walking around the forest finding sustenance in decaying animals, sunlight and pools of water (lacking a root system, they must drink water through a facial orifice). One of the few times you're likely to see groups of them is when groups of them are growing from their seeds. Since Needlefolk tend to stay in small territories, their seeds are spread in a small area.

The only other time you're likely to see large groups of them is when they're stalking their most hated enemy: elves. No one's entirely sure where this incredible hatred come from, but Needlefolk feel such a passionate loathing that they've even developed the bizarre ability to sense elven blood from 1,500 feet away. Even if it's a large troupe of elves, a single Needlefolk will stalk them, seething, until a big enough number of Needlefolks have been drawn to the elves to warrant an attack. They're smart enough to put aside hatred in the name of strategy and survival.

Needlefolk have no magical abilities, but can shoot the thorns from their body into one target. The thorns sting like the dickens. You'll be quite safe duing winter months though. Since they're decidous plants, Needlefolk shed their leaves in auturm and sleep through the cold.
Posted by Blanca Martinez de Rituerto at 17:31