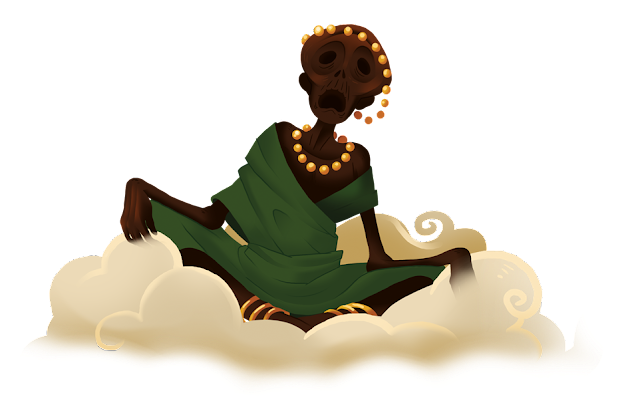 I'm sure you guys have come across one of these fellas at some point or another, and begun to crumble to dust as a result of their curse. Well, that's all your fault because what were you doing disturbing the dead.

Mummies are interesting, but sadly very varied in design, tending to stick to the Egyptian archetype. A mummy is a dead body that's had some sort of treatment to it to preserve it, so instead of rotting away into goo, it becomes withered and dessicated. The word 'mummy' comes from 'mummia', the combination of ingredients used in the embalming process. This sort of thing usually comes attached to belief that the soul can return to the body, and that it should be kept as nice as possible. Lots of other cultures practices mummification: Incas, the people of the Canary Islands, the Philippines, Buddhists... The Buddhists are the most interesting ones I think, since it's self-mummification.

Some Buddhist monks believed they knew when they were going to die. When they felt their time was coming, they changed their diet to a set of vegetation that they thought would help preserve them post-death. They were then walled alive, where they eventually starved-slash-died of dehydration, trying to do so in the lotus position. The body would be exhumed after a set amount of time, and if it was in good condition, it would become a sacred relic. Some of these mummies were cast in gold (hint: use levitating gold-clad mummies in your game). Self-mummification is now banned.

Mummification is still practiced today, though not as commonly. There's embalming, which is like mummification-lite, a way of keeping the body nice for a long period of time. There's also Summum (which is kinda exclusive). If you look up mummies, they're not hugely impressive for the whole preservation brouhaha; they all look black and shrunken, so what's the big deal. But then you look at Rosalia Rombaldo, which was a little girl who was mummified by her father in 1920, who despite a looking a little waxy and yellow, looks remarkably fresh for someone who's been dead for almost a century.
Posted by Blanca Martinez de Rituerto at 00:04