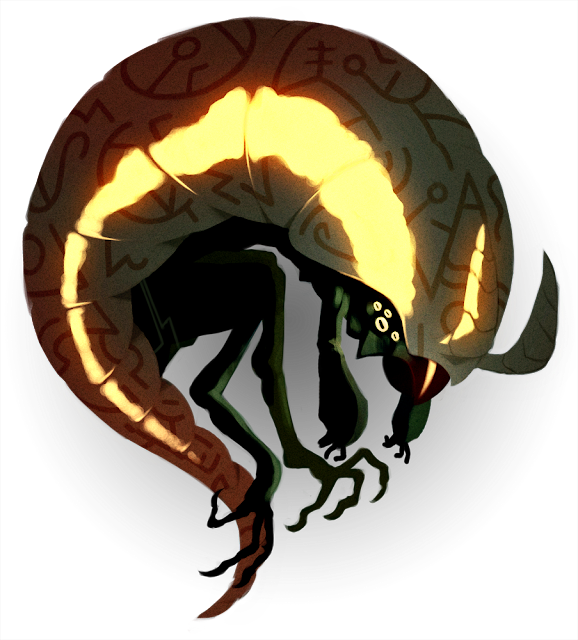 He Who Sleeps Beneath The Earth; the Great Hungerer; the Tarrasque. He lies dormant, but one day will wake. We await his return, when he will sow such perfect desolation that the worlds will be wiped clean and the land formed anew. We watch for His coming, as we lower our eyes towards his sleeping-place in the heart of the earth. Be vigilant, brothers and sisters; he comes.

I remember when I first picked up a Monster Manual my immediate urge was to scour the thing for the most powerful creature therein. I asked my (more knowledgeable) friend (who had lent me the book) who swiftly pointed me in the direction of the Tarrasque. I was suitably impressed - a legendary, 50-foot bipedal godzilla-esque creature which can't actually die and whose shell rendered it almost invulnerable to both weapons and magic. In fact, it can be said that the Tarrasque has only two good points - it sleeps underground for a very long time in between feeding sessions (or "natural disasters" depending on where you live) and there is mercifully only one of them. Needless to say, neither of these are much comfort if you are unlucky enough to experience it first-hand.

I think my interpretation here might seem a little extreme to some people, as the Tarrasque's appearance is very iconic. I just didn't want to draw the same godzilla/king bowser hybrid that most other artists use. Three principal things strike me about the Tarrasque's described appearance - it is bipedal, it has a shell that can bounce spells back at their users, and it has horns. It is also, curiously, described as "bird-like" in gait. The shell here is based off various pillbugs as well as the amazing Pangolin - this seems to be an element that some artists neglect in the Tarrasque's appearance, and since being practically unkillable is one of the creature's main traits I made a bigger deal out of it.

The beak, eyes and the curled-up pose are sort of a nod towards the Cthulhu mythos, which matches the creature's MO of sleeping for long periods of time. I also like the idea that some misguided apocalyptic cult is aware of the Tarrasque and worships it (despite the creature having only animalian intelligence).

I'm actually genuinely interested in what people think of the redesign here so feel free to let me know what you guys think in the comments.
Posted by Joe Sparrow at 07:30