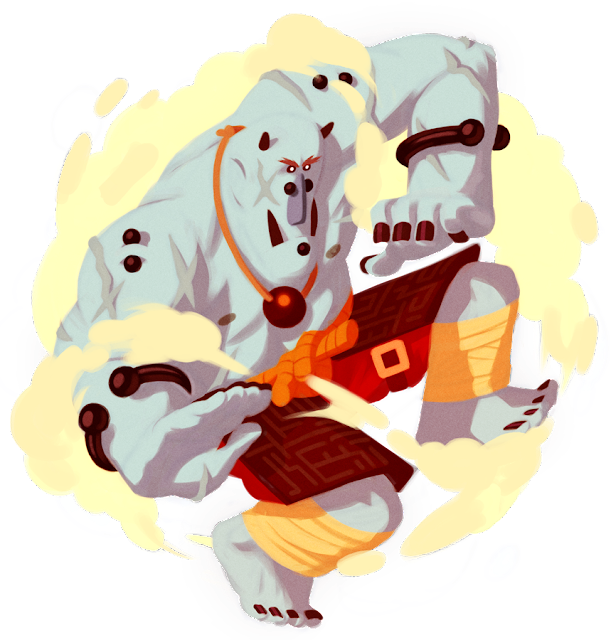 Ogres are a kind of small giant which share common traits of stupidity and choleric temper with most of their brethren. An Ogre Mage is actually a distinct species altogether, of a much greater order of strength and intelligence and with an uncommonly innate adeptitude for magic spells. Rather than the rigorous and constant ritual training required by humans to reach even the lowest level of sorcery, Ogre Magi have access to high-level magic such as flight and transformation as hereditary abilities. Perhaps, as with many races, they were bred long ago by ancient wizards toying with forms of magical life? Their short black horns certainly suggest some level of demonic lineage.

The Ogre Mage's presence in the first 3.5 Monster Manual always intrigued me a little. There are many races capable of taking class levels in, say, sorcerer - in fact, many creature descriptions include an example of a "classed" monster. The Ogre Mage's name is fairly unique in the D&D lexicon - it isn't just an Ogre with a class, but a race of its own.

One thing you can get with very high-level spellcasters is they have ways to turn their spells into spell-like-abilities - the former needing meditation/preparation, the latter simply being something you can spontaneously do - the idea behind this being that once you've cast a certain spell a hundred times it becomes second nature. I like creatures like Ogre Magi who have spell-like-abilities because it's like they have some kind of savage, animalian magic that they can do reliably at a young age, whereas humans have to put on airs and study for decades to get anywhere.

tried to experiment with some Zangief scars and body piercings. some pretty fascinating reference photos out there, folks.
Posted by Joe Sparrow at 17:02