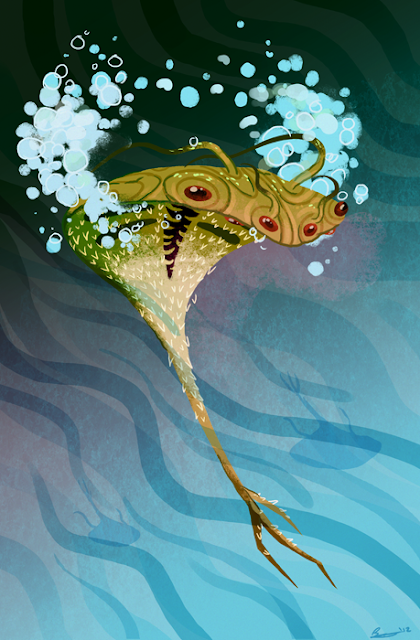 Yet another monster with those names I either constantly have looked up or be ready to copy paste. Looked up if it was based on or inspired by some mesoamerican monster, but it doesn't seem to be.

These dudes are manta rays with a bad disposition. And that's pretty much the beginning and end of it. When I first saw them I was hoping they were gonna be some kind of aboleth-like creature but they are literally intelligent four-foot long manta rays. The Demon Lord Demogorgon just gathered a bunch of these little fellas up and gave them smarts and a superiority complex. They're not even stingrays (no poison), they're just kinda slippery and mean. I've attempted to give them something a little more to their look so they have tell-tale signs of demonic influence. Some of them are called Vampiric Ixitxachitl, which aren't undead, just a subspecies that can feed off your life energy.

They should make for an interesting early-level enemy for your underwater campaign, instead of relying on kuo-toa and sahuagins. Plus your players may not think too much of the innocent little ray that's lying in the sand. Then come the negative levels.
Posted by Blanca Martinez de Rituerto at 23:25