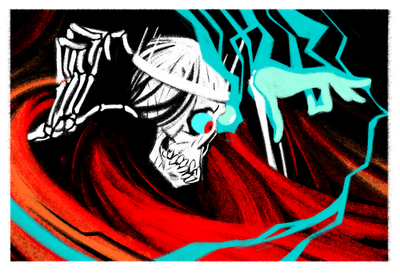 Whether they originate in good intentions or ill, ours is a world riddled with secrets. Great or small, of tawdry inconsequence or unspeakable importance, secrets are and have always been a source of power for those wise enough to see them; this is the chief tenet of Vecna-worship. In reality an insanely old and unfathomly powerful lich, Vecna is a terrifying entity, bent on the simple, terrible goal of destroying all other gods in order to rule the universe.

Vecna is my favourite villain deity. As described in the lore (and also in the stats - should you care to peruse them in Deities and Demigods), he's not actually as powerful as some of the more fundamental deities like Pelor and Nerull, as essentially he's just an uppity lich. But there's something about his insidious Neutral Evil alignment and wily obsession with secrets that makes me think that while he may at times seem like a small, angry dog yipping at the heels of the big gods, he probably does have a legitimate plan of action to succeed in his objective of serial deicide. What form will it take? Well, he's certainly not telling you anytime soon.
Posted by Joe Sparrow at 22:47