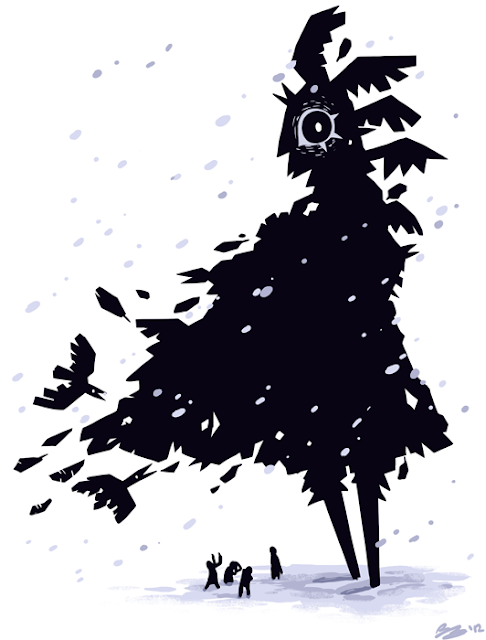 The Raven Queen is the goddess of Death and Fate, and rules over Winter. Unlike a good amount of gods, she started out mortal and gained her deific powers through cunning and deals. She was originally a consort to Nerull, an evil death god, who she eventually destroyed, claiming his powers for herself. She doesn't rule over the dead, but only governs the act of dying. She gained power over Fate and Winter as rewards for aiding other gods in fighting deities who went rogue. She's cold and distant, having few friend or enemies. Her only enemy is Orcus, a demon lord of the undead, who wants to claim her powers for himself. The Raven Queen's original name and identity are lost in the sea of time.

Normally we stick to 3.5 here, since that's the edition we count as "ours", but I was already aware of the Raven Queen and when picking out gods for this month I got a really cool idea for her. It was eventually developed into this. She seems to be the 4th edition replacement for Wee Jas as the impartial but scary death goddess.

I like non-evil death gods. It's really easy in death-fearing, Judeo-Christian world to assign death gods to a Satan-like role. But it's more intersting when they're not evil; they're there as guardians, because death is inevitable and someone needs to make sure its administered with balance and fairness. Take the joyful Death of the Endless, or Hades of Greek mythology. Hades seem to get screwed over in modern adaptations, often being put in a scheming, evil, demonic role (see Disney's Hercules or the 2010 Clash of the Titans). In the myths I've read, he was always a scary dude, but one of the nicer, calmer gods of the pantheon (relatively, of course).
Posted by Blanca Martinez de Rituerto at 08:00