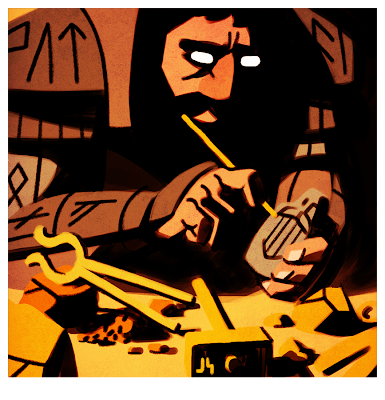 Dwarven legend reveres Moradin not only as a ruler, but as a creator. Tales tell that he fashioned the first Dwarves from jewels and precious metals, explaining both the Dwarven passion for minerals and their propensity for forging.

So God Month is officially over now! I'm sure you're pleased to note that we were mostly on-schedule for the whole thing (unlike last year's Dragon Month which, uh, dragged on a bit) which hopefully bodes well for the future. I'm going to be returning as a regular contributor to the blog again, anyway. I've really enjoyed doing these illustrations for the last few weeks!

Picking a religion is a fun part of character creation for me, and Blanca always spends a long time designing pantheons of gods whenever she's writing a campaign setting. Deities - particularly of the polytheistic, Romanesque, soap-opera superheroes variety (where they're all trying to murder each other or having babies with mortals) reflect interestingly on the humans who invent or revere them. I think both of us have tried to illustrate our picks in a way that maybe gives you an idea of how that god might be represented by its worshippers, which I think is an important thing to consider when planning a campaign or playing the role of a character.
Posted by Joe Sparrow at 16:07