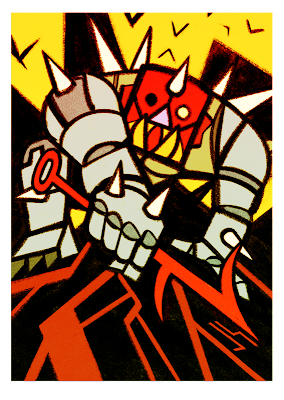 Long have the orcs given him war-praise, and long has he blessed us with bounty upon bounty of blood, like rivers, thick with bodies.

Another Gygax original, Gruumsh is one of a couple of common orc deities put forward in the PHB.

I love orcs. So simple-minded, so vicious, so oddly noble. An uncaring and vicious society, sure, but it's worked out fine for them, often making them the most numerous race in many fantasy settings. Reading about orc lifestyle it was fun to think of what kind of iconography would actually be used in orc deity worship to inspire faith and reverence. I went for a simple, angular design with lots of angry colours, but there's a bit of a stained-glass feeling in there too.

Gruumsh actually lives on Acheron, a hellish dimension whose upper levels actually consist of countless giant metal cube-planets all waging war with each other. I thought about trying to incorporate this into the design but after Boccob I didn't want to make you all think I'm some kind of geometric one-trick pony.
Posted by Joe Sparrow at 13:09