GOD MONTH: Fharlanghn, the Dweller on the Horizon 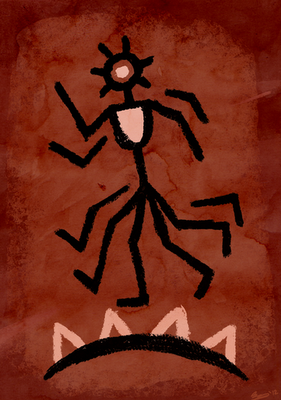 Fharlanghn rules over roads, freedom and those who travel the world. He offers safety, luck and favourable weather to those who pray to him. He's brother to Celestian, the Far Wanderer, who rules over stars, space and those who travel beyond the world. Fharlanghn is one of the few gods (maybe the only one) who mostly lives in the Prime Material Plane. While most other gods make their home in other dimensions, Fharlanghn, by virtue of being the god of travel, has no home. Not sure why he prefers the non-spiritual world over other dimensions. He sometimes goes across other dimensions, but very rarely, and he almost never sets foot on the Elemental Plane of Air or any of the outmost dimensions, which would fall more under his brother's domain.

As a travelling god, he has no temples; only small shrines near roads. His mortal servants follow his example and never stay in the same place for long. Since he has no set home, his dead worshipper's souls don't go away. Instead, they stay on their home plane, and continue to aid travellers. Many people worship him, especially adventurers or any others who make their living from travelling.

I went for a primitive look for Fharlanghn, the god with possibly the most annoying name to spell and pronounce. Even though he isn't a major god, it feels like he would be very ancient, and would be worshipped before settled civilization became a thing.
Posted by Blanca Martinez de Rituerto at 14:43