GOD MONTH: Ehlonna of the Forests 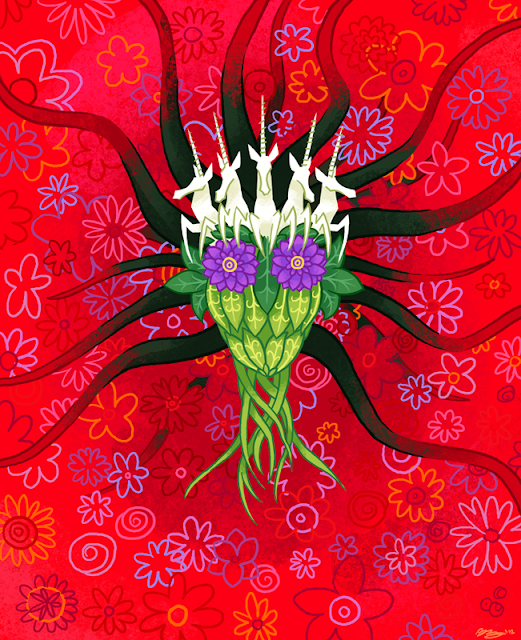 Ehlonna is one of D&D's many nature gods, representing peace, fertility and goodness in nature. She rivals Obad-Hai (representing primal energy and balance in nature) and fights against Kannan (representing brutality and destruction in nature). Of all the nature deities, she's the one most sympathetic to those seeking to farm and hunt in it, though she always works to prevent the wild from being completely tamed. Ehlonna isn't an elven goddess, but she's very often worshipped by them and has allies among the pantheon of elven gods. She rules over the good animals, fey and plants of the forest, and her most faithful servants and heralds are unicorns.

This image marks the end of God Month. I was originally going to put Elhonna first, but I decided to put her last to end God Month with a colorful, trippy bang. Obvious Arcimboldo influences in this image, though not as clever and refined as he is. Originally she was just going to be a unicorn-headed figure with a cloak of leaves and flowers and a rose halo, but a lot of my original plans had animal heads (still there with Azul) and the halo thing felt like I was just repearing Pelor.
Posted by Blanca Martinez de Rituerto at 09:00