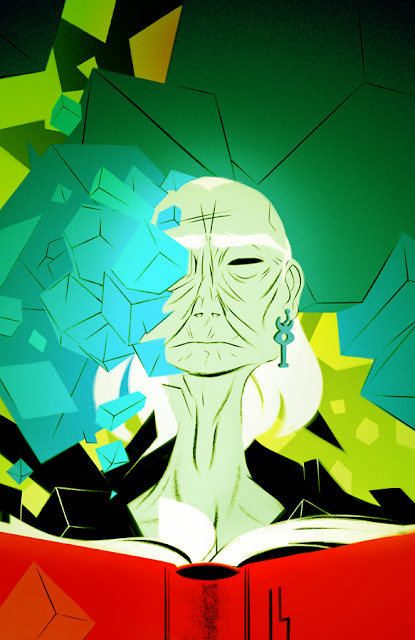 Perhaps, long ago, when the archmage Boccob was still a man, there still existed some corner of his heart which was not dedicated to the pursuit of knowledge and the harnessing of the endless primal energies of magic. Perhaps he knew uncertainty, as men know. Perhaps he knew fear. Perhaps love.

Now, Boccob is beyond all these. No man can say how he ascended to divinity; many foolish wizards have attempted to follow in his footsteps, but none have succeeded. Alone in his endless Library of Lore, he ponders in infinite silence the mysteries of magic and of the multiverse. He answers no prayers, he does not engage in petty squabbles, as the other gods do. And yet, his followers - wizards, and students of the arcane arts - revere him with utmost respect as a paragon of knowledge, an example of greatness to be aspired to.

Hello again! It's been a while, hasn't it? I'm back to join in the fun on god month, to celebrate the 2nd year anniversary (wow!) of Dungeons and Drawings. So you'll be getting double the usual amount of uploads for the next few weeks. Lucky you guys!

Pretty much from the get-go with D&D, Boccob was my favourite deity. Something about this person who'd become utterly unhinged from the human element of the world really got me thinking - I initially imagined him as little more than a chaotic mass of letter-forms or shapes. I was a tiny bit disappointed by the "official" look - a slightly generic-looking white-haired old wizard - but Boccob was an invention of Gygax himself so I thought I'd try to involve some of it in my version. I tried to get a sense of this old guy whose body is frail and decaying but whose abstract, conceptual mind is breaking free. The shapes are mostly based on the Platonic Solids, the most basic and perfect 3-dimensional forms (not to mention the shapes which are used for most modern dice!).
Posted by Joe Sparrow at 00:30