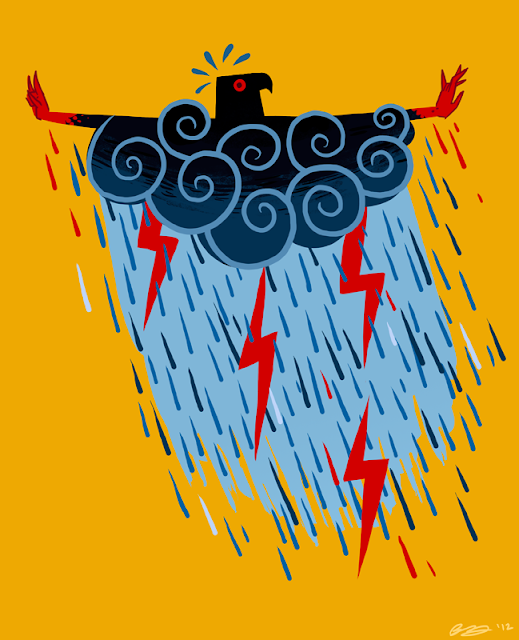 Azul rules over rain in the desert. He's a favourite deity of travellers not out of any true love or reverence, but out of necessity. This is a fickle god, happy to withhold his bounty until he's given a blood sacrifice (by drowning), and cause terrible droughts when offended. His temples are built on springs and oases, which are ferociously guarded by his priests.

This god exists outside the usual D&D patheon, belonging instead of the group of optional gods used in the Sandstorm setting. Even though I haven't illustrated any creatures from Sandstorm for this blog, it's probably my favourite setting; I really love deserts. There's just something about long stretches of arid, lifeless, deadly nothing with small settlements trying to survive that I find incredibly interesting.

And out of all the gods listed for Sandstorm, I think Azul is the most fascinating. I like the idea of a god whose domains include Water and Plant, and who farmers and travellers rely so heavily on, should be such a petty, selfish god who demands the life of something (usually an animal, but will take a sentient creature) in exchange for his life-sustaining services. Using ironic sacrifice. I'm not sure whether he has a rivalry with Solanil and Tem-Et-Tu (goddesses of oases and rivers, respectively), or whether they're also afraid of offending him because if he stops raining, their own domains would dry up.

It's always something I like in mythology. A god that's worshipping it isn't so much as admiring it as much as it is begging it not to hurt you.