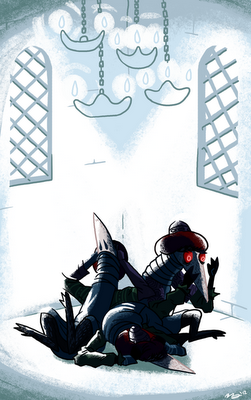 Dark Creepers are a race of small sneaky subterranean creatures. They're very good at ambushing and have a natural knack for finding weak spots in their enemies and exploiting them. They absolutely despise light, natural or otherwise. While it doesn't deal damage or kill them, it still causes them a great deal of pain. They cover themselves from head to toe in tunics, capes, wraps, turbans..., so that the only thing you can see of them are their noses, hooves and eyebrows.

Despite their name and light-hating ways, they're not evil creatures (but they're not good either). They prefer to be left to themselves and will run from most conflicts. Just don't bring a lamp or torch, because they'll tear you to shreds if them see you using such an item.
Posted by Blanca Martinez de Rituerto at 17:13 0 comments 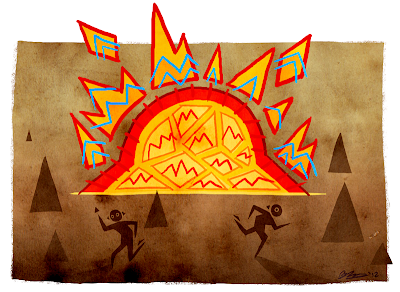 Conflagration oozes are one of those things where people aren't sure whether they're a magical creation, a natural accident or some kind of mean joke. The fire inside the ooze is an especially painful toxin. Physical contact with the ooze causes the toxin to burn and seep though the skin and causes both fire and Constitution damage. Most oozes are mindless creatures, but this particular ooze (essentially roiling flame barely kept contained by a thin membrane) has malevolent intelligence behind it.

They're as smart as humans, and show strategy when hunting, immobilizing victims with their spell-like abilities before consuming them. Some of them are even imbued with hellish power (called Infernal Conflagrations Oozes), which albeit not more intelligent, are much more deadly.
Posted by Blanca Martinez de Rituerto at 08:00 0 comments 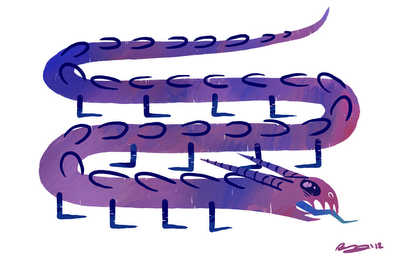 Behir are huge serpentine creatures that live in warm rocky hills. They have a dozen small limbs, though most of the time they have them tucked against their body and slither along the ground like a snake. They're very dragonlike (right down to a lightning-based breath weapon), but actually loathe dragons with a ferocious passion. The alignment and type of the dragon does not come into consideration; hatred makes all things equal. Should the dragon prove too powerful for the Behir to kill, it will immediately leave it territory for a more dragon-free environment. Even though it has a breath weapon, it's only used in combat against multiple opponents or big enemies; it's much more likely to simply bite and swallow an adventurer.

Tried out something a bit different with the image this time. I feel I don't do it enough on this blog.
Posted by Blanca Martinez de Rituerto at 11:56 1 comments 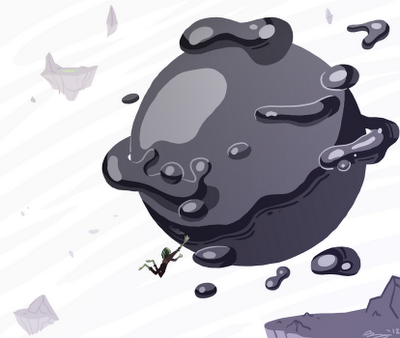 The Aoa are a phenomenon that occurs when rifts for the Positive and Negative Energy Planes touch. Some planar scholars theorize that they're energy-neutral version of energons. They float along in the Astral and Ethereal planes, but can sometimes be found near planar rifts, absorbing magical energy. In fact, they do little more than float, and are only motivated into movement by the presence of strong magical auras. Which is unfortunate for people travelling through its home planes, since that requires precisely that sort of magic. If you try to attack them by magic, there's a very good chance that the spell will be reflected back on the caster.

Aoa appear in two forms: Sphere and Droplet versions. The former is the parental form, and the latter is the small blob that breaks off when it reflects enough magic. 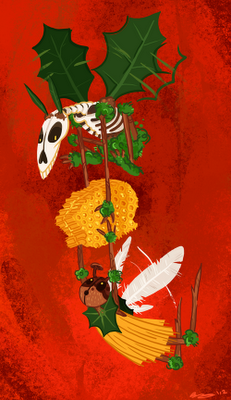 Bogun are the homunculi of the druidic world. Where a wizard uses clay and alchemical ingredients to construct a homunculus, the bogun is created using woodland refuse including leaves, feathers, sticks, mud, animal skeletons, insect carapaces, slime... meaning that each bogun vary wildly in their physical appearance according to the materials used. Creation of both things require some blood of its master before being infused with life.

It's not a creature meant for combat, but can carry out small tasks for its master (fetch that, watch this...). It does have a weak poison that can cause some pretty bad rashes and cramps, so that's useful for annoying low-level adventurers intruding in a sacred grove.
Posted by Blanca Martinez de Rituerto at 17:35 1 comments 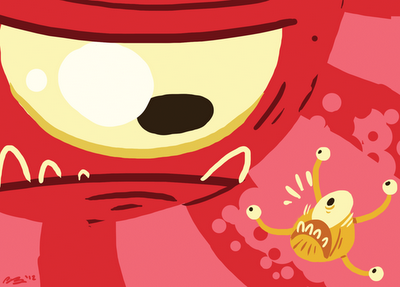 Beholders are (except for some rare occasions) solitary creatures. They're solitary because they're vain and spiteful creatures. They believe that they, as an individual, represent absolute physical and intellectual perfection, and can't stand the presence of other hideous, horribly imperfect creatures. They especially loathe other beholders, since the presence of another of their species is an insult to themselves.

They also really really hate beholderkin. Beholderkin are mutanted versions of this first species. Not sure how they came about, so I'm going to say wizards is probably most likely.

Eyeball beholderkin are the least threatening and weakest of the bunch. Where an actual beholder in a 8-foot creature of hate sporting a mass of eyestalks capable of party-ending magic, the eyeball beholderkin is an 8-inch nothing menacing you with cantrips (and a level one spell). They get used as familiars by wizards. They're on the same level as cats, toads and weasels in that sense.
Posted by Blanca Martinez de Rituerto at 19:38 4 comments