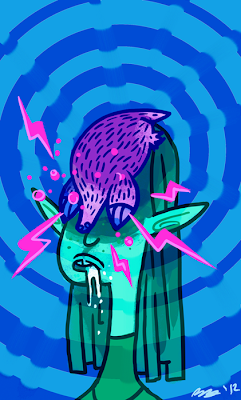 Amazingly psychic moles aren't another entry in the silly things wizards make tag (not to my knowledge, at least), but it's darn close. These little fellas must be quite annoying for early-level psionic adventurers, draining your precious power points and giving you psychic-only diseases.

Psionics (psychic magic) is one of those sets of rules I never bothered learning with D&D. The game is already complicated and varied enough as it is without throwing another form of casting in the game. All I really know about it is what I read about in this monster's entry, and the various complaints of loud people in forums claiming that they're broken.

Any psionic stories from you guys? 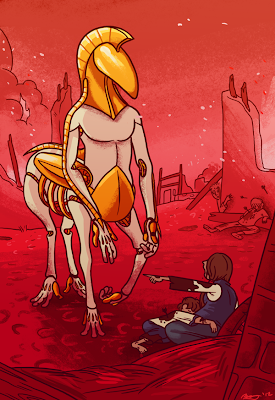 There are numerous extradimensional creatures, Inevitables, from that deal with those that break the Law. Not little things, like thievery or such, but the Laws of Justice, Promise, Death, Space and Time. Zelekhuts are the ones who pursue those who broke Justice by escaping punishment. These gold and white robots chase after that person and capture them. If said fleeing miscreant happens to be executed by him arm spiked chains or any other reason, well, that's just too bad. Zelekhuts are also the weakest of the Inevitables, so it only gets stronger from here.

I tried to be alter the design into something a bit weirder. In Mechanus (where these things come from), I don't imagine they have the empathy to give their Terminator the somewhat comforting features of a humanoid creature. There's also no reason to have them look like a horse, but work with me here. So I tried to make the Zelekhut more aberrant, like something you really, really wouldn't want chasing after you.

Also replaced the wings with jet engines going on the sides. Because you don't need no stinkin' wings in Mechanus. Jets! If you're gonna catch criminals, you do it with a eyeless, hand-footed, cage-bodied golden centaur with JETS.

In other news, a viewer was so enamoured with my partner's Grisgol that they went and did a spectacular figurine out of it.
Posted by Blanca Martinez de Rituerto at 08:20 0 comments 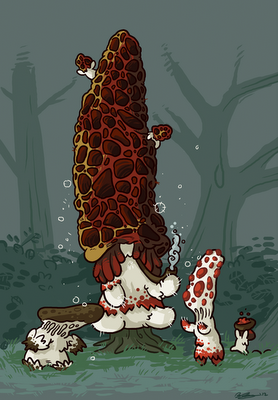 I like mushrooms. They're a delicious piece of not-plant. I also like how weird they look; there are some that you could look at and be astounded to find that they are, in fact, a mushroom. All of the myconids in this image take inspiration from different kinds of mushroom, varying in crazy looks and deliciousness.
Posted by Blanca Martinez de Rituerto at 20:25 4 comments