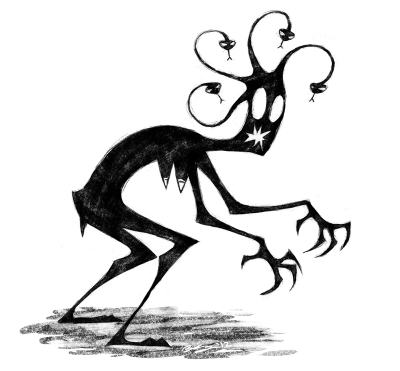 The Medusa is a classic creature (of Greek mythology if you don't know, and if you don't know a classic creature like a medusa from mythology what are you doing liking D&D anyway). Too often I feel that these monster women, which in the myths turn people to stone though an overwhelming mystical ugliness, get portrayed in too sexy a way too often. Like, just a scaly hot chick with snakes for hair that turns you to stone because her eyes are magic or something.

In D&D, their petrification powers do come from their eyes (called petrifying gaze), so I guess you get a free pass for that. But I tried to get the more monstrous aspect of the original Medusa across because having a monster that turns you to stone through sheer ugliness just strikes me as more interesting than magic eyes. That's horror stuff right there. You can't even sneak up and kill her in her sleep because her awful melted, pockmarked, scarred, malformed, sunken, twisted, scaly, oozing face is like right there, man.

And then I up and come with something mildly unsexy but otherwise just a silhouette. I did have something a bit uglier in my sketchbook, but I started doing some silhouettes which just looked nicer. That and if I rendered Medusa's true face at the height of my capabilities I may not have an audience anymore. I do this for your own safety, folks.

The MCM Expo was quite swell, despite me messing up on printing times and being unable to bring new stock. Still, it was nice and I sold out on some of my things and got to talk to some nice people and get a handful of new followers out of the deal. Special hello to the nice girl that recognized me from the internet (always an ego boost). I hope that the rush at the MLP booth wasn't too taxing and that you're enjoying the goofy hippogriff drawing.
Posted by Blanca Martinez de Rituerto at 21:48