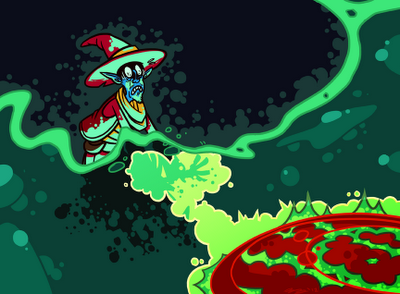 You know what's hard to design? Oozes. There's only so many ways you can try to design an amoeba. Still, this is a sight better than that catastrophe under the title of Reekmurk. Eegh. I should really redo that particular image.

Some people have a lot of complaints about D&D being really caster-biased. Wizards and such are really squishy early game, when in later levels they gain powers of deific proportions, leaving combat-based classes in the dust. Well, for the sake of balance in the game, you have to break out the occasional mage-killer. The kinda monster where you totally aren't targeting the caster; it just likes to eat magic. If you didn't want to get eaten by a giant magic-eating lime jelly maybe you shoulda rolled a rogue.

This fella's shown up a couple of times now. He doesn't seem to be a very good wizard. I should probably give him a name. Rinceko? Orkwind? I'm sure I'll think of something.
Posted by Blanca Martinez de Rituerto at 23:10