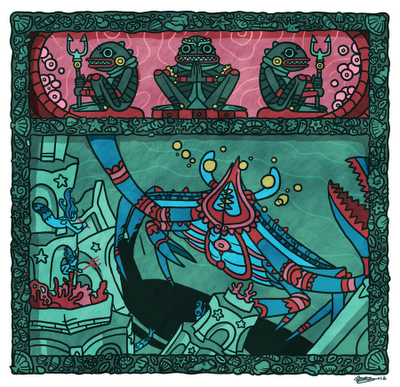 The kuo-toa priests and alchemists were finished. Years of research, prayers and failures had resulted in the ultimate weapon for their sea-floor expansionist war. Tomorrow a high priest with the coral circlet and his bodyguards would crawl through the belly compartment and lead the attack, but tonight the army would dine on their creation's discarded entrails.

The Siege Crab is a half-living tank, forged by the Kuo Toa (or any other evil sea-dwelling race, should you wish) by surgical and magical means. A live giant crab is taken and a chunk of its insides are taken out to create a small transportation area where its handlers can sit. Its carapace is reinforced with runes to give it resistnace to spells and even block the attacks from incorporeal creatures. Its sheer size and powerful pincers make it ideal for destroying fleets and razing cities.

Of course, since its half alive, that means that the death of its controller can result in, at best, a bored crab, or, at worst, a confused and pained rampaging creature. Also, if you happen to down the crab, that's pretty much a guarantee that the people inside it are trapped and will eventually starve, since the crab will almost inevitably land on its belly.
Posted by Blanca Martinez de Rituerto at 11:12