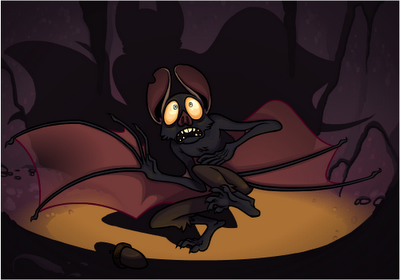 The Nycter are a race of small bat-men that live in close-knit communities in forest caves. They're a peaceful, flimsy bunch, preferring talk to fight. When cornered, they unleash a paralyzing shriek that gives them enough time to escape into the darkness. Their leaders are called Protectors of the Cave, Nycters with class levels in druid.

Despite their bat-like similarity, the Desmodu and the Nycter don't get along. The Nycter fear the Desmodu since they are much bigger and stronger, the way a human looks at a giant. The Desmodu view the smaller race as cowardly and unintelligent (though the Nycter still possesses average human intelligence). The Nycter retain more of their bat-like qualities, being able to fly and having very sensitive ears (to the point that sonic attacks are extra painful for them).

This is a race of creatures that can be used as a player race, should the DM approve. It sounds like quite a neat idea for some kinda subterranean adventure. A way to avoid the whole you have to be either a drow, druegar, svirfneblin or any of the classic human-like underground races.

Image brought to use by Katie Tiedrich of Awkward Zombie and Aikonia. Internet celebrity, wowzers!
Posted by Blanca Martinez de Rituerto at 05:00