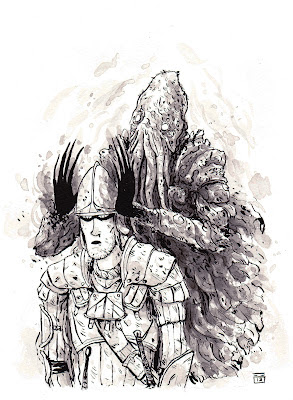 Mind Flayers (also known as Illithids) arrived on the world from some unknown place beyond the stars. They live in the stony corrupt darkness, hidden from the light of the surface world. Of the organized creatures to live in the Underdark, these may be the most feared. While most other races simply kill or enslave interlopers, these creatures take it a step further. We're their cattle; we're the second stage of their growth cycle.

Mind Flayer's feed on the brains of their victims, done by boring holes into their skulls using their tentacles. It's partially the solid matter that makes up a brain that they consume, but a good part of their nutrition is made up of the psychic and other mental energy within it. Though they try to cultivate their food using mind control, they find the taste of slave brain unsatisfying (and it's dangerous, since their greatest disaster involved the freedom of the Githzerai and Githyanki, their racial enemies). The brain of a life well-lived and full of knowledge, willpower and excitement is delicious to the Mind Flayer.

The Mind Flayer is also quasi parasitic. That second stage of the growth cycle I mentioned? An Illithid tadpole is taken from the tank of the Elder Brain, and placed inside a facial orifice of some humanoid creture, where it consumed the brain and grows until the physical structure of the host is changed into their final form.

No wonder these guys are a classic D&D monster.

Kicking off this Guest Week with a fabulous ink wash illustration by Antoine Porcheron. Just look at that snazz. Way to make me look bad.
Posted by Blanca Martinez de Rituerto at 10:07