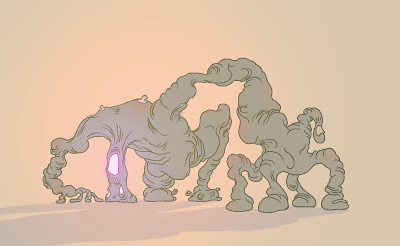 Something moves in the corners of your torch light as you enter the room. A piece of fabric? But there's no wind here. It moves again. A bundle of snakes? But it's flesh-coloured and saggy, and as it drags itself closer you see among the twisted skin tangles of boneless fingers and a skull-less human face.

Something for a horror campaign. A Forsaken Shell is an empty skin with imbued unlife, motivated by vengeance. Despite its appearance, it's horribly elastic and agile. Once it gets a horrible flaccid hand on you, it begins to wrap itself around you and squeeze. Perhaps it's some kind of feeble-minded attempt to take over your solid, structured form. In D&D campaign, skin wears you!

And then it kills you and your guts and bones dissolve as you become another awful slithering skin.

Image brought to you by Tony Comley, a director at Sherbet studios. Just lookit how gross this thing is.
Posted by Blanca Martinez de Rituerto at 04:00