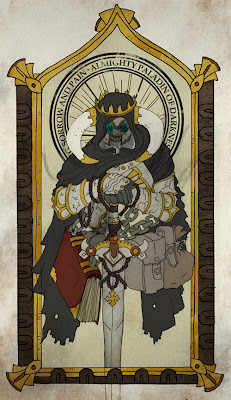 We all know that sometimes when you die, you don't stay underground like you should. Maybe the right prayers weren't performed, or maybe you're full of hatred that reaches beyond the grave. Or maybe you were chosen by some dark god to become their general for their massive undead army.

That's what a Death Knight is: a warrior of evil disposition who so impressed the forces of darkness that they decided to give him a promotion. They're like evil paladins (a recommended class for these guys tends to be the blackguard class), surrounded by an aura of fear, able to summon hellfire and attracting any undead within a 200 mile radius. That has the potential to be the mass migration of the undead of a smallish country to the spot where this guy is standing.

Also these fellas have turn immunity, so good luck with that strategy, clerics for the forces of good.

This image brought to us by Cristian Ortiz Martínez, a.k.a Crom.
Posted by Blanca Martinez de Rituerto at 05:00