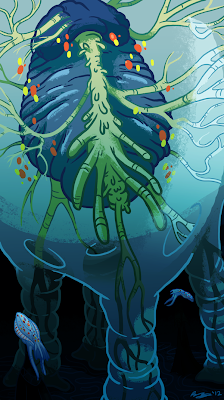 The Underdark is shared by a great number of highly organized malicious creatures. As a contrast to the regimented societal structure of the backstabbing drow, there's the alien society of the equally malicious well-oiled machine of the illithids. The thing that keeps them working in such perfect order? The Elder Brain.

A huge amount of pulsing, sentient brain matter, the Elder Brain is the centre of the illithid cities. Though capable of movement, it mostly spends its life floating in the tanks and pools built for it. It's part leader, part supercomputer, part moral police and part afterlife; in short, it's near deific. It senses the thoughts of all creatures within the city. Not only does this prevent treason, but it also makes the cities notoriously difficult to penetrate.

The life of the mind flayer begins and ends in the tank of the Elder Brain. As little tadpoles, they're placed in its tank, where it feeds off their psychic energy. Those who survive get to become fully formed mind flayers. At the end of an mind flayer's life, the brain is removed from the creature's head and placed in the tank, where it's absorbed by their leader.

Tried to do a little redesigning of this creature (though I ended up with pretty much the same colours, because they just work). The Elder Brain tends to be shown as a bit too human, I think. If you look at the cerebral structures of animals, you find that they have really weird shapes as one part of the brain is more developed for whatever skill the animal has. When you get to simpler animals, they get even stranger. A shark's brain is a strange elongated thing. So I tried to model this a little bit more off an octopus brain with lots of neuron-tentacles.