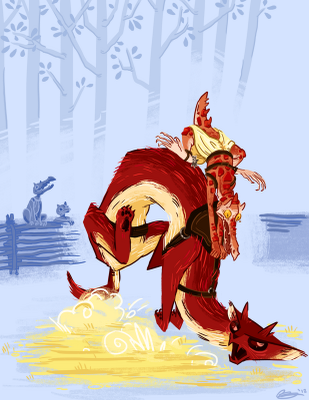 A few kobolds are perched on the fence of the outdoor corral, partially to make sure that the dire weasels don't stray too far should they escape, but mostly to giggle at Bik's attempts to break in an especially lively wild doe.

I know what some of you may be thinking. "Dire weasels? Well that's just silly." Well, they have dang near dire anything and I'm suprised there isn't a template. Or maybe I just haven't found it yet.

Dire weasels are to kobolds as dogs and horses are to humans. They make good mounts well-suited for tunnel-dwelling creatures such as themselves, and are notorious for their persistance in battle. Like a normal weasels and stoats, their battle-tactic amounts to hang on to the enemy and not let go until they die. Unlike normal weasels and stoats, they drain blood (mechanically translating to 1d4 points of Con damage).

What I'm saying is try to pick it off with arrows before it wriggles down a hole and don't get bit.

Had lots of fun watching videos of weasels and rodeos as reference for this image.
Posted by Blanca Martinez de Rituerto at 15:23