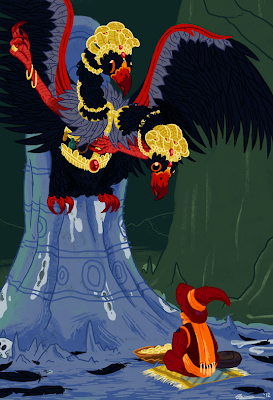 Chronotyryn are one of those high level monsters who believe themselves to be gods --or that at least like to have others believe that. They have innate time-controlling abilities used to bewilder enemies and their feathers are adamantine, what's normally an extremely hard and rare ore.

It's an extremely intelligent creature and its double brain and voice boxes allow it to take twice as many actions per round. They bedeck themselves in the magical items of their victims, and keep several of them attached to a harness they wear, so they always have a trick up their sleeve.

In other news, some of you may already be aware of him, but Noah 'Spoony' Antwiler has a series of shorts called Counter Monkey, stories of his previous experiences with D&D (and some other games) both as a DM and a player. They're very sweet and funny and you should totally go watch them.
Posted by Blanca Martinez de Rituerto at 15:43