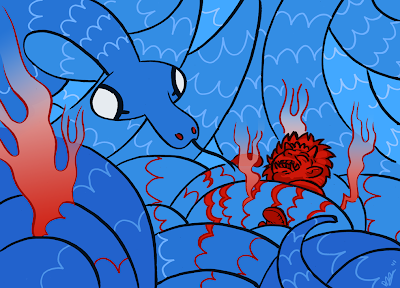 Beyond the normal dangers of Faerûn's freezing North, a winding invisible predator is found. What seems at first to be the work of some twisting unnatural wind working itself over the snow and rocks is something else. Soon you find yourself trapped in the cold coils of a cruel unseen something, squeezing your bones and soaking up your life-heat. Something thin, quick and frigid tickles your cheek.

It's difficult to find a creature to go under the elemental tag that'll be interesting. Most of them are X Elemental or Y Elemental, while the more interesting ones get filed under the outsider type. The Ice Serpent is something that managed to slip through the gaps of that classification hoo-ha.

This creature has an interesting way of dealing damage. It's pretty simple in its attacks, being mostly a creature that grabs and squeezes, lacking even a bite or slam attack. It's constrict deals a combination of lethal damage (the constriction itself) and nonlethal damage (cold damage as it drains the heat from you). Potentially, it can just suck the heat out of you until you're unconscious then slither off. And then a blizzard kills you. Them's the breaks.

Also a little bit strange that despite the fact that this creature subsits on the body heat of living things, it still takes double damage from fire sources (it has the cold subtype). I guess something has to balance out the absurd DR it has.
Posted by Blanca Martinez de Rituerto at 23:21 2 comments

THIS S IS ANIMATED YOU SHOULD FOR RIZZLES CLICK THE PICTURE

Now that that's out of the way, this is an Abeil... vassal. A vassal is probably most accurate.

The Abeil are a race of tall, industrious bee-like humanoids. Their society is divided into three castes: vassals (the workers, in all different roles of society), soldiers and a queen. The worker is obviously the weakest of these three, but still possess a muscle-atrophying poison and the ability to create a buzz with their wings that leaves enemies into a sleepy stupor. Soldiers also have an amplified eardrum-rupturing version of this.

Like many insects, Abeils like to expand their territory, partially through economic means, which may or may not be good for any other surrounding cultures.

And now for my biological lecture for anybody who cares to read far enough down to this bit. I know why they seperated abeil society into worker-soldier-queen society: it makes for easy classification into who the commoners, the ones you fight and the one you diplomatize with are gonna be. Actual bee society is also quite interesting in that it's a worker-drone-queen society, where the all-female workers do all the work and defending of the hive. The stingless, all-male drones exist purely for the purpose of mating with the queen, usually of a different hive, since the queen stores all the genetic material necessary from previous drones for her 3-5 year lifespan.

The queen is also a really interesting thing. While the term 'queen' implies control, she's a slave to the hive. She literally spends her whole life laying eggs, and if she ever stops, the workers will raise a larva to become the new queen, which will kill the old one. Beekeepers usually imprison the queen in a certain section of the hive, so we can enjoy delicious, larva-free honey.

Also a little bit disappointed that abeils don't have a racial penalty to smoke-based attacks.
Posted by Blanca Martinez de Rituerto at 10:23 3 comments 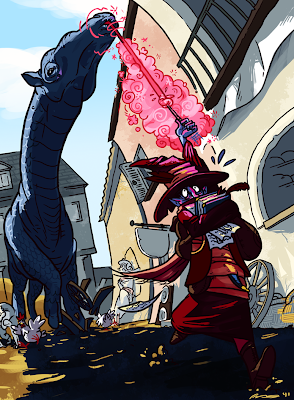 Aw dang, I shouldn'ta given the PCs that staff; they're really screwing over my campaign. I'd better break out the big guns.

At CR 17 (14 levels higher than the Rust Monster), with high AC and lots of hit points, it guarantees the destruction of a few magic items. It's a large, giraffe-like creature with a long sticky tongue it uses to grab objects from a character and begin draining the enchantments out of them, turning them into relatively useless mundane objects. It feeds on the drained magic.

The Disenchanter literally exists only to take away the characters' toys. Let me read from the Fiend Folio to you: "The Disenchanter ignores individuals who do not radiate magic and lopes away if there's no food to be found, even if it's attacked."

So a Disenchanter attacks the party. Staff of sphere of annihilation? Well, now it's a stick. And your +5 ring of protection is now a regular gaudy ring. Also your potions are now water. And now the Disenchanter's walked away. Wow, that sucked. I guess you guys shoulda rolled higher on your Spot checks, huh.
Posted by Blanca Martinez de Rituerto at 16:56 2 comments