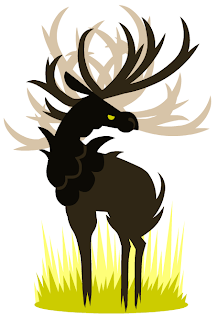 You come across a huge deer on your travels through the Beastlands. It stands four times taller than a normal human being and antlers sprout not only from its head, but down its neck to its haunches, giving it a coat of grand bony spears. You're confident in the strength and tactics of your party as you charge through the bushes, where you surround the surprised Gaspar. It can't run anywhere without being met by fences of spears and swords. As you raise your weapons to pierce its comparatively soft underbelly, the Gaspar rears up and slams down.

There's a golden light and you can't see your quarry anymore, nor the eternal afternoon sun of Kirgala, nor the ancient trees of the Beastlands. The Gaspar didn't leave, but you did.

Drawing by Adam Vian of Super Flash Bros, since I'm currently trying to get my old laptop to cooperate with me and Photoshop. 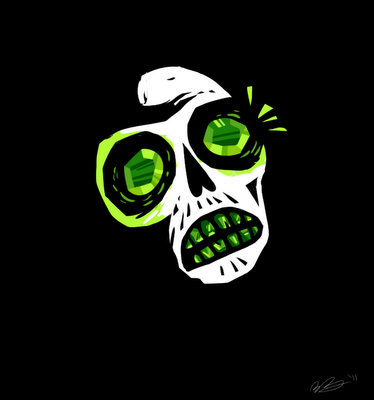 In the darkness you make out a pile of treasure. Seated atop all this is a dessicated severed head, dusty, parchment-like skin pulled tight against the skull. The treasure gleams green in the arcane glow of the emeralds that line its mouth and stare out at you from its head. It does not move. Roll for Fortitude.

A lich is what happens when a wizard thinks living is for squares and makes itself into a skele-zombie to continue studying magic throughout eternity.

A demilich is what happens when a lich decides that plain ol' having a body's for squares and decides to encase its soul into a gem-studded bone. Normally a skull. They can be an evil sentient bejewelled rib if they feel like it.

So a demilich is even more dangerous than a regular lich, created by Gary Gygax in the infamous Tomb of Horrors adventure for the purpose of killing any player who thought D&D is just a game. In addition to all the spells that a normal lich would have, the demilich has a signature ability: trap the soul. It basically sucks the spirit out of your body (which instantly crumbles to ash) and traps it in one of its gems. It can wipe out a whole party in just over 20 seconds, combat time.

Don't worry, your soul won't be trapped inside the skull forever. The demilich will slowly eat you over the course of 24 hours.
Posted by Blanca Martinez de Rituerto at 00:46 3 comments 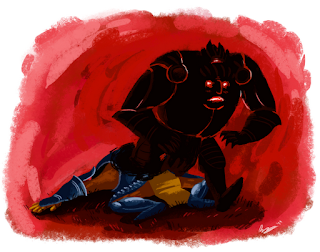 Tark Skulltaker was our party's barbarian. Due to an unfotunate set of attacks involving wraiths, he died. Also unfotunately, when you're killed by a wraith, you rise as one seconds later, so that meant we had to double kill his evil spirit.

Wraiths are one of your standard D&D monsters for horror campaigns, when you want things to get a bit dangerous. We found one that had been killing kids and slew it dead, but not before withering away Tark and my pony Butterbutt. These monsters are extra dangerous because they not only hurt you when they attack you, they also drain the life from you (in D&D language, Constitution drain, the deadliest of drains). They have an aura around them that spooks animals, making it difficult for rangers, druid or just anyone who fights from horseback to engage in combat. Third, they're not solid, making them super difficult to hit. Spackle was pretty useless in that particular combat until I remembered I'm the one with the wand of holy magic and started whacking the wraith with it.

At least this means that the guy that played him is gonna get a second character portrait now. But not for a while, so that means I get to go back to doing regular monsters! 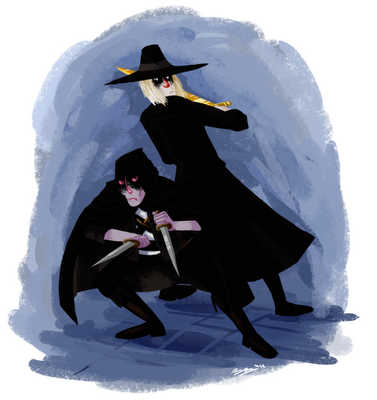 Like most parties, we have a rogue and a cleric. Our rogue is a tiefling (supposedly, since he doesn't actually show any quasi-demonic abilities or traits) who specialized in knife-throwing, and the cleric is a human optimized for destroying the undead. Like, literally, we'd walk into a room filled with skeletons, he'd flash his holy symbol and boom. Everything's dead. The guy playing the cleric recently left the group due to the amount of stuff he's been doing, so that's gonna make things a little more deadly. We use my pony to detect when there are undead stalking us.