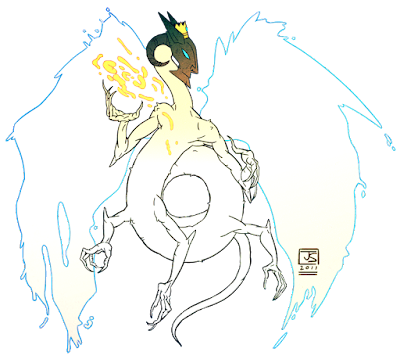 It is said by some that Bahamut was once a mortal dragon who by strength of will and virtue of deed ascended long ago to the ranks of the gods (a transformation which is not entirely unique - extremely old or formidable dragons have been known to reach a state of near-godhood). Others believe he is part of some grander creation myth, including the legendary rivalry with his god-sister, Tiamat, mother of all evil dragons. Whatever myth you indulge in, Bahamut is famed for his great power and kindness. He ferociously (almost tyrannically) lays waste to evildoers, and will be moved to action by the plight of the very smallest, slightest creature in distress.

We're almost at the end of our Dragon Month now (I already did the joke about it lasting for like three months so I'll just apologise for the lateness at this stage) and it's been an enjoyable way of commemorating having run the blog for a whole 100 posts! We've gotten a really great following for Dungeons & Drawings, a large portion of which is thanks to other people - friends, family, followers in general - linking us elsewhere and telling people about us and stuff. So thanks, to everyone!

As you probably realised, we've both been finding it difficult to keep posting every week - both our jobs have been really time-consuming of late, I've been drawing a comic book for someone which will be published next April and Blanca's been doing drawn animation for a film that's hopefully going to see some kind of nation-wide release, at least in the UK where we live. Basically all is definitely well (at least for the time being, haha), which is great because we have the priviledge of getting to do what we enjoy in the midst of a pretty shaky financial environment.

Anyway, if you're still with me after the rambling: I'm not going to be posting regularly with Dungeons & Drawings any more. This isn't a vague "I need more spare time in general" kinda thing, I'm at point right now where I want to devote time to another project (writing a comic of my own) and I feel like if I take the time I was spending on D&D and put it all into the production of this comic I could really get something great going. Blanca will still be posting weekly (and hopefully I'll be able to come back for future guest weeks!) but this is it for my regular contributions. It's been fun!

Obviously gonna plug my website at joe-sparrow.com (available for drawings, cartoons, barmitzvahs, that sort of thing) and my slightly more lazily-kept blog at torpordust.blogspot.com and my deviantart. Hope the blog continues to flourish and proliferate in my (relative) absence!
Posted by Joe Sparrow at 20:35 2 comments 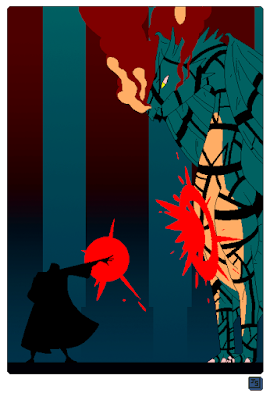 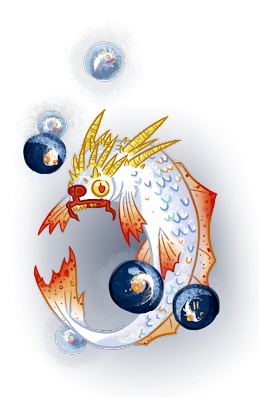 Yu Lungs, otherwise known at Carp Dragons are the infant form Oriental dragons. They're born in rivers, lakes and ponds, and live in mud palaces of their own making. They're the least impressive, weak and least intelligent of these dragons, and their only magical talent is mild telepathy. They never grow larger than a man. After a hundred years they transform with a thunderclap, entering one of many adult forms available to them.

Joe's already written apologies for our delay, but I feel I should also extend them.

Anyway, trying NOT to do one of the more classic dragons from the manuals. This one was fun. I especially enjoyed covering my eyes so I wouldn't look at the illustration in the book so I wouldn't be at all influenced by it. Decided to go for a bit of a koi look with this.
Posted by Blanca Martinez de Rituerto at 13:16 2 comments