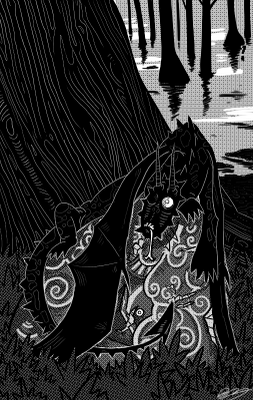 Black dragons are the most cruel-tempered of the chromatic dragons. Where blue dragons are vain, reds are tyrannical, greens are two-faced and whites are primal, blacks are petty. They despise all beautiful things. These dragons are of corpse-like apperance, growing more and more skeletal with age, and live in fetid swamps. They surround themselves in darkness, slime and putrefaction. The meat they eat is of creatures they've eaten and allowed to rot in the stinking pools of their undewater homes. Black dragons are ambushers; their chosen homes have too many trees for flight, and its easier to lie in the cool mud and wait for some hapless victim to walk by.

Tried to do something a little bit more unusual with this dragon. I ended up taking a lot of influence from Oceanic and Inuit masks. 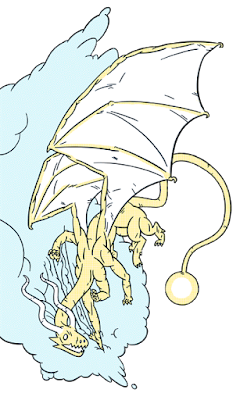 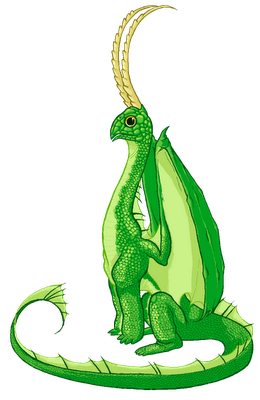 Green Dragons are your fairly classic creatures: they're huge, they live in forests, they eat faeires and elves and other good creatures. Out of the five chromatic dragons, the Greens are one of the two lawful species (the other being Blue). However, unlike their Blue cousins, Green Dragons aren't creatures of honour. Be wary of them. Though they pride themselves on appearing civil and being masters of the spoken word, this is a paper-thin disguise. Green dragons are jealous, covetous creatures. Their words mask insults and their promises are broken when their mood sours, and you'll find yourself burnt from the inside out by their chlorine breath.

My contribution to DRAGON MONTH, ladies and gents. Behold our attempts to these creatures interesting again, since Smaug cemented the scaly lizard look. Admittedly, I'm not off to the best start with the whole "let's make this original" thing. I'll try something weirder with my next dragon. With this one I ended up trying the pixelly-style thing, which is a lot harder that I'd originally anticipated.

I've started a special tagging method over at Reference Reference. Now you can look at specific images that served as guides for the Green Dragon.
Posted by Blanca Martinez de Rituerto at 22:45 0 comments

Moreso than any of their metallic brethren, Gold Dragons are creatures of utmost law and virtue. They are known to be kind and fantastically intellgent, devoting much of their attention to righting wrongs and helping the weak. Gold Dragons appear to take at times an almost parental role when dealing with lesser creatures, whether lending a helping wing to a besieged adventurer or scolding an opportunistic treasure-thief.

To celebrate our 100th post (it's kind of a joint thing with the blog's first year anniversary) this fair month of August is going to be Dragon Month. Yes, you may have noticed a conspicuous absence of fantasy's bescaled poster boys from our pages so far - early on we decided to hold off from illustrating them until we reached post number 100.

If the idea of this blog is to challenge peoples' perception of what standard fantasy art should look like, then dragons are pretty high on the hit-list of "stuff to challenge". Especially on the internet, dragons must be some of the most popular and often-drawn fantasy creatures ever, and a quick search on somewhere like Deviantart will give you a good cross-section of the visual tropes they tend to subscribe to. Seriously, go look at it. See that? That's what we're gonna try to avoid. Not because it's bad, but because being weird and different makes us feel special. ;_;

Stay tuned for the rest of Dragon Month and see if you like it!
Posted by Joe Sparrow at 11:54 0 comments