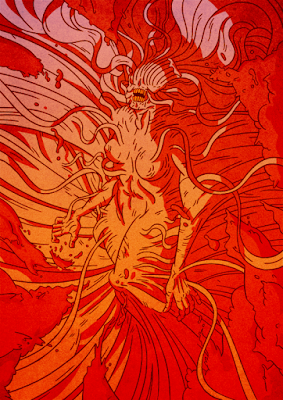 This depiction of Wee Jas is a little unusual if you've ever seen any literature on her, which mostly describes her as a beautiful, red-headed woman with skull-themed jewelery. I'm not a fan of depicting gods as visually identical to humans, though, they need to be a little more abstract or symbolic to pack more of a punch. This actually affects pretty much all of the gods as listed in the Deities & Demigods book - most of them are illustrated in the same manner you'd draw an ordinary PC; you might not even get that they were deities if you weren't told so. In contrast, there's this one little icon of Wee Jas in the Player's Handbook that I really like - it has the look of a skull, but it also has these weird flame/tendril/ribbon things that seem to grow out of it, getting this combination of magic-plus-death that for me sums up the goddess. I based my design on that, trying to depict the Ruby Sorceress in a flayed, corpse-like body, roiling in gory magic, deep in her home dimension of Acheron.
Posted by Joe Sparrow at 00:04