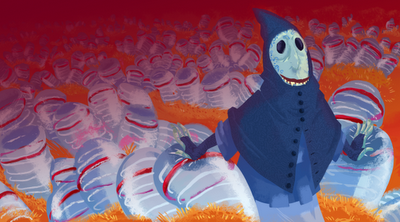 Alienists are wizards and sorcerers who have delved to deep into the study of aberrations and the chaotic powers of the Far Realm. They follow their science with religious zeal, slowly descending into insanity and physical mutation as they chase immortality and trascendence of normal dimensions. Even the creatures they summon with their spells are of a warped, unnatural appearance.

This is a pretty good prestige class for players who don't want to sacrifice magical power for specific class abilities, the Alienist being a flavour prestige rather than a strategically sound one. As you gains levels, your character literally begins to go insane; you lose points to your Wisdom stat and take penalties to your interaction with normal people and animals. It's kind of balanced out by a handful of extra hit points and a bunch of damage redutions. But you're also crazy. That's the fun of flavour prestige classes.

And what's fantasy without a little HP Lovecraft thrown in the mix?

PS: I've started a new blog that may be useful to any artists out there. It's called Reference Reference, and I'm going to be archiving my collection of reference/inspirational images. Look at it to see some of the references I used for this week's image.
Posted by Blanca Martinez de Rituerto at 18:45