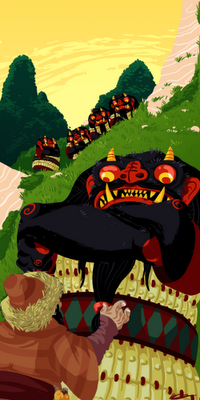 The Wang-Liang are a race of mountain and forest dwelling giants. They used to be one of the dominant races, but that position has been usurped by the human population. As spirit-like creatures, they have a number of invisibility and shape-shifting powers, which they could easily use to dupe humans. Despite their inherent evil and envy of this younger race, they are very honorable creatures.

Oh Oriental Adventures, you are such an interesting setting. I wish to play a campaign in your world.

The Wang-Liang is one of the weakest of the giant race (CR 4), out of all the giants in the D&D books. The weakest "true" giants, as from the monster manual, are CR 9, which means that you have to be pretty high level to be able to take one on. I guess ogres are CR 3, but they're literally just dim-witted monstrous men that beat you with clubs.

Wang-Liang have a lot more flavour-stuff going on with them. They have the aforementioned spell-like abilities, and they also have a high intelligence score (compare the ogre's 6 to the wang-liangs 16. For the reader's not familiar with these numbers, humans only get an average of 10 for intelligence score). Their signature weapons are double-ended bladed staffs, but then they also have retractable claws.

I'm not really sure where wang-liangs come from as a concept. Folklore, especially oriental folklore, is fraught with shape-shifting spirits and demons. I couldn't find a creature out there that had the same name as the wang-liang, so I can only guess that these are based on some kinda especially tricky oni.
Posted by Blanca Martinez de Rituerto at 11:02