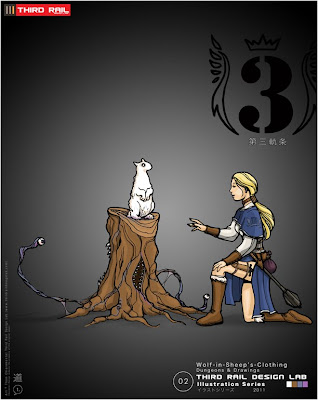 This creature appears as a tree stump with a rabbit sitting on its shorn edge. But on getting closer the stump reveals teeth and tentacles; the rabbit is just the lure it used to draw you in.

Image is provided by Third Rail Design Lab, a comic/illustrator. Yeahhhhh, this is one of those creatures that got excluded from further editions of D&D because it's just a little too silly to take seriously, even for this game. The fact that the rabbit is a part of the creature's body seals the deal. And its name doesn't really help that much because implies something a little more... something that isn't a stump with a rabbit on its head. It's still a classic though.

Paizo attempts to slightly refluff the monster in their book Misfit Monsters Redeemed by making the creature on top be the last thing it killed; which makes more sense because you kill one adventurer, then you lure the rest to you with images of him.
Posted by Blanca Martinez de Rituerto at 03:40