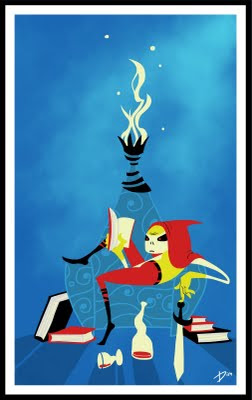 The Crypt Thing is a guardian of sacred places and objects, which sits atop an ancient stone throne. It's a reanimated corpse, brought back by priests, to do away with intruders and thieves in a nonlethal manner. If it ever comes to force, the Crypt Thing will first scatter his opponents with minor teleportation magic. Despite being undead, it's not evil and can be civil with those who don't present a threat to him or his charge.

Round two of guest week comes to a close by an encore image from a previous guest, Adam Vian. He's recently put out a game he did in collaboration with Catherine Unger called From Beyond, which is quite delightful and spooky. And another game which I've always enjoyed and feel the need to bring to your attention is The Arrow Of Time (included: time travel, elemental arrows, a little soldier with a whistle for a head).
Posted by Blanca Martinez de Rituerto at 21:15