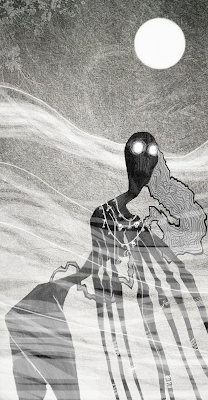 The Blackstone Gigant is a gargantuan guardian of unholy temples. Created from massive blocks of dark stone by evil priests, they are usually carved in the shape of many-armed female demons. They're unlike other golems in that Blackstone Gigants have basic malignant intelligence. Her touch can turn her victims to stone, allowing her to cruelly shatter their petrified bodies to make into morbid jewellery. Should she choose not to shatter them, she can bring them back to life later on, completely under her control. Despite their massive size and cumbersome bodies, Blackstone Gigants are capable of effortless flight.

This image is brought to you by Charlie Ray Hamill. He's also an excellent photographer and a huge fan of glamorous and dangerous ladies.

Sorry about the late double-post (this was supposed to be up yesterday), but we're currently enjoying a short holiday in Spain and wifi-equipped cafés are a little harder to come by than we anticipated. Oh well!
Posted by Blanca Martinez de Rituerto at 10:23