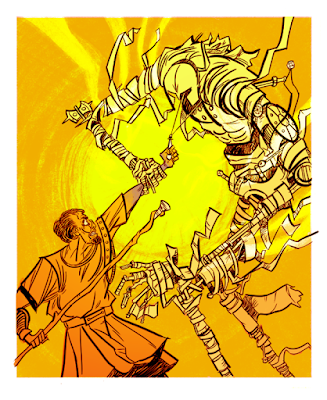 A Grisgol is a strange construct, made haphazardly but nonetheless dangerous. Its body is comprised of a tattered mass of various magical items, loosely held together by mummy-like bandages of spell scrolls and wards. Its arm might be a sword or staff; its head an enchanted helm, or its insides a clinking stack of alchemical potions - their highly chaotic, magical nature makes them immune to most magical effects. In addition to this, the enchantments usually used to power an ordinary golem are simply too weak to bring Grisgols to life; they are usually powered by a Lich's phylactery - a small trinket such as a jewel or phial containing the soul of a dead sorcerer. This makes them doubly dangerous - not only are their physical bodies corrosive and unstable, their souls are ancient and malicious.

Our second guest week begins tomorrow! As with last time, we'll be updating with a new image every day for a whole week, involving a bunch of different artists with different styles. Check back each day for some new artsy goodness.
Posted by Joe Sparrow at 17:27