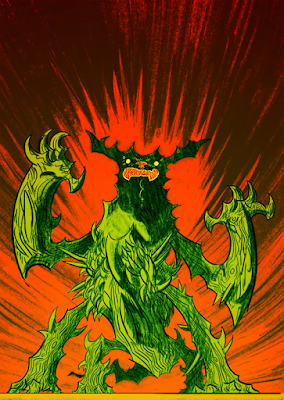 Battlebriars are actually huge plants, magically grown by teams of druids to serve as living siege engines. Galloping along on six muscular legs, they resemble huge, knotted masses of bark and huge thorns, making attacking one in melee combat a treacherous task to say the least (to take no account of the creature's monstrous size). Often proving too wild for their creators to control, many Battlebriars now roam free in the forests of the world, killing indescriminately to feed.

Inspired a lot by horned lizards and by one of my favourite magic cards. I like how you have this stereotype of druids being peaceful hippies - I imagine one day they all just had enough of people ripping on them and thought "fuck it, let's make some CR 15 living siege weapons, that'll teach them to make fun of us". Those craaaaazy druids.
Posted by Joe Sparrow at 21:08