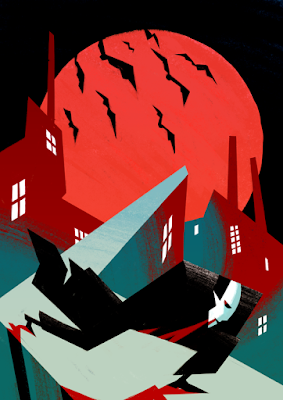 Vampirism is a dreadful magical curse which spreads, virus-like, from one creature to another. The curse is passed onto any creature whose life is drained by an existing vampire, and only creatures of roughly human physiognomy are succeptible. When the afflicted creature dies, it rises again as a creature of the night, driven by tortuous necessity to drink the blood of the living. Vampires vary in temperament and style as much as the diverse races they hail from, but by the nature of the curse itself are predestined towards acts of evil.

Vampires are such an old and complicated myth, it's a shame that the rampant popularity they've enjoyed culturally over the last few years does little to acknowledge the weird shit that inspired them (one part of necrophilia, one part cannibalism and one part sexual predation and rape, for starters). The most well-known incarnation is probably still Béla Lugosi's, but it's a little too visually hammy for my tastes. Much scarier for me is the Max Schreck version, this scene in particular.

Sorry for the sort of sparse illustration this week, it's actually part of a poster design that I did reworked without the text. German expressionism, go!
Posted by Joe Sparrow at 11:31