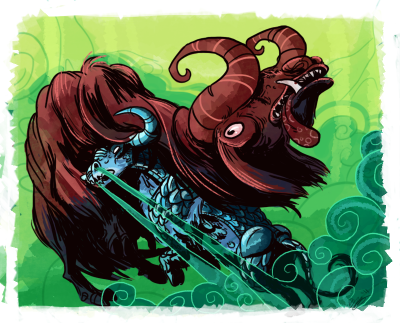 The Catoblepas and Gorgon are both classic monsters of the D&D beastiaries, but I have a special reason for drawing them both together; they're based on the same mythological creature, though one of them was given a different name.

Pliny the Elder and Bartholomeaeus Anglicus describe the Catoblepas as an Ethiopian bull-like creature with a long neck and head always kept low under the weight of its massive horns. Its vision is deadly. Some centuries later, Claudius Aelianus added that the creature had shaggy hair, a scaly back and poisonous breath. It's generally assumed that all these authors were referring to Africa's wilderbeest.

So this single monster was divided into two monsters: the extremely aggresive, metal-scaled Gorgon with petryfying breath, and a considerably more peaceful, long-necked Catoblepas with death vision.