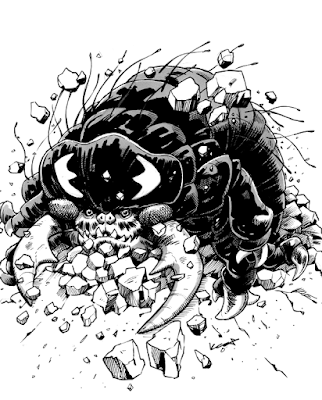 The Umber Hulk is a subterranean creature capable of burrowing long distances through solid rock. Creatures of mindless anger, they are most often found rampaging through the countryside, attacking and devouring anything small and soft enough not to pose a threat (including humans). Whilst it may seem merely a creature of brute strength, the Umber Hulk is not a force to be underestimated- while it may be slightly lacking in intelligence or magical ability, those ferociously strong arms, capable of literally battering their way through stone, can make short work even of an armoured foe should they get within reach. Umber Hulks have also been known to use their burrowing ability to create traps, pitfalls and cave-ins to deal with enemies too tough to handle otherwise.

Today's illustration is brought to you by Keith Sparrow, a professional illustrator with many years of experience who has specialised in illustrations for children and children's books. Probably the most well-known string to his bow is the popular Mega Manga book, one of a series of How-To-Draw-Manga books which you see pretty often in comic book stores and art stores in england. As you might have gathered from the name, he's also my dad and pretty much the sole reason I wanted to be an illustrator growing up. I really like that Keith produced this illustration completely by hand, it really shows off his genuine skill in that regard, and makes for a really original interpretation of a classic monster. Cheers, dad!
Posted by Joe Sparrow at 09:20