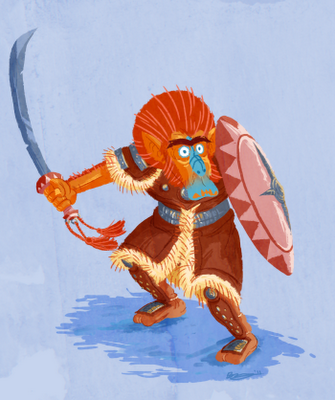 The hobgoblins form the warrior branch of the goblin army, brandishing spears, axes and swords proudly looted from their fallen enemies. They are a fierce race, all trained in warfare and all eager to expand the empire of their species, but they are as likely to attack another tribe of their own kind as to attack others.

The hobgoblins are the larger cousins of the goblins, man-sized and relying more on tactics and strength than on sneakiness. Though barbaric, they're extremely loyal to their chiefs. They're also another typical low-level encounter.

Sorry about the no entries last week. We wanted to open the post-Guest Week with some animations, but we proved to be a little ambitious. The animations will still be posted in the future, but they still need some work.

Meanwhile, enjoy a mandrill with a sword.
Posted by Blanca Martinez de Rituerto at 12:59