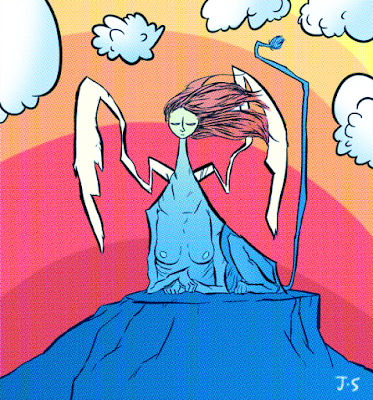 Sphinxes are a family of creatures that widely vary in their levels of intelligence. Hieraco- and Criosphinxes are little more than savage animals, chimaeric creatures who fly and hunt effortlessly, rarely concerning themselves with anything above their basic urges. Gynosphinxes are much more intelligent creatures, with such great intellects that their their time is mostly spent in contemplation of things far more sophisticated than the human mind could appreciate. They are famously fond of puzzles, riddles, or ways of thinking that challenge their (already vast) understanding of the world, and are known to have much respect for creatures capable of appreciating such things. Though physically mighty they are reluctant to fight and would much rather win over an enemy with words than claws.

As requested by Wolfgang Baur, who runs Kobold Quarterly and has done an awful lot of stuff for a variety of roleplaying games! I like any creature that's basically "x-but-with-a-human-face", as it feels like these have really creepy, Boschian inspiration for them. I assume sphinxes were at least partially inspired by this kind of thing (be warned, it's kind of gross) but regardless it's nice to see a mythical beast that doesn't present women in a completely psychotic way (I'm looking at you, Harpies!).

Another reminder that tomorrow we start our Guest Week! check back every day, we'll be uploading another picture by a different artist. IT WILL BE AWESOME
Posted by Joe Sparrow at 14:09