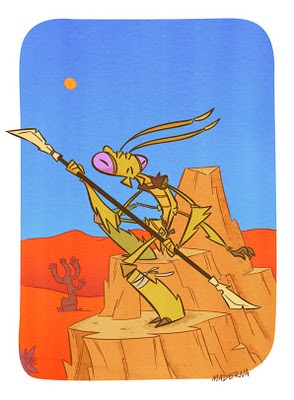 The mantis warriors scour their arid territory for today's meal, moving slowly and deliberately to best blend in with their surroundings. They come across some high cliffs and, looking up, spot a pair of desert goats steadily making their way up the rocky face. The hunters begin to leap up the steep face, easily finding handholds, and quickly closing the distance between them and their prey. They fall upon the goats with poisonous bites and swipes from their two-bladed gythkas.

Thri-Kreen are a classic D&D monster, appearing all the way back in 1st Edition and gaining popularity in 2nd Edition with the introduction of the Dark Sun campaign setting, where they became one of the playable races. They're one of the more popular non-core player races, though the Thri-Kreen are a little bit to strong for a truly low-level campaign. And really, who wouldn't want to play a giant praying mantis that can leap farther than most can walk, has unique racial weapons, doesn't need to sleep and (depending on the DM) has psychic powers?

This is the final entry for this round of Guest Week. Our closing image has been provided by Victoria Maderna, whose artwork has appeared in the official 4th Edition D&D book, the Player's Strategy Guide. More of her artwork can be seen on Pigs with Crayons, along with that of her partner Federico Piatti.

I'd like to thank all the artists that have contributed to the blog for the past week. It's been really awesome to see different people's styles take on the monsters of D&D. We're definitely going to do another guest week again in the future.
Posted by Blanca Martinez de Rituerto at 08:51