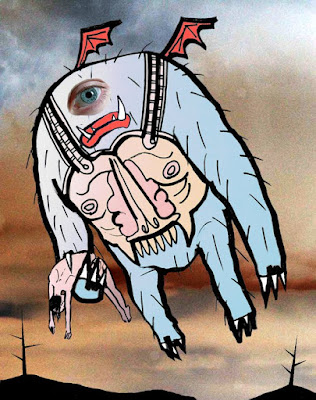 The Nalfeshnee is an enormous demon and denizen of the chaotic Abyss. It appears as a huge gorilla-like creature, standing three times the size of a man and weighing more than 8,000 pounds. It flutters obscenely on impossibly-small bat wings, taking horrible enthusiasm in its task: the torturing of damned souls.

In D&D, Devils and Demons are two distinct families of hell-kin; the former reside in the Nine Hells of Baator and represent the Lawful Evil alignment - Devils are evil but generally live by a lawful system, and are more likely to play "within the rules". By contrast, Demons are always Chaotic Evil, and their home - the Abyss - is a lawless place, governed by whoever happens to be strongest at the time (and often-changing).

The Nalfeshnee is brought to us by one Matt Dicks, another illustrator friend of ours. Although perhaps not the greatest enthusiast of role-playing-games, Matt is in posession of a truly amazing and distinctive style, kinda Ralph Steadman in its violence but always with an intelligent restraint. I thought a demonic creature would suit the style well, and I really like what he's given us.
Posted by Joe Sparrow at 09:39