Oh daaaaang, yo. Look who's artwork is on the Kobold Quarterly site. 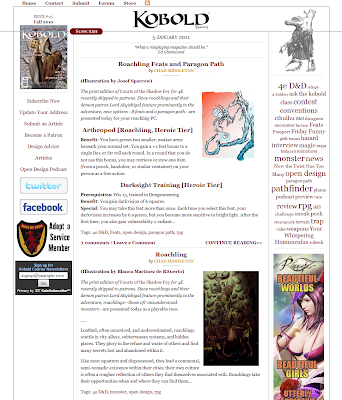 We got comissioned to do two illustrations for a new race, the Roachlings, featured in Kobold Quartlerly's 4e adventure setting, Courts of the Shadow Fey. They are a filthy people of half-roach, half-man, primarily living in the most disgusting urban environments. They are sneaky and numerous, and so accustomed to living in filth that disease and poison have little to no effect on them.

Special thanks to Chad Middleton for comissioning us, and Wolfgang Baur (publisher) and Scott Gable (web editor).

And on another note, starting the 10th of January we are going to be having a GUEST WEEK, where we'll be posting monsters as interpreted by seven taleneted artists. It's gon' be good.
Posted by Blanca Martinez de Rituerto at 09:18