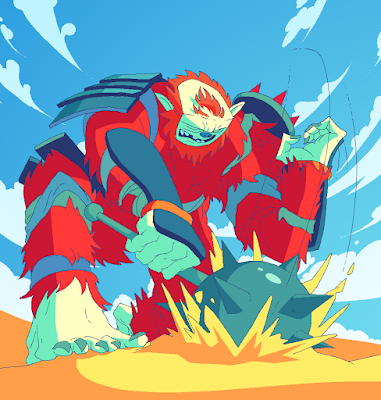 Despite appearances, Bugbears are are a close (although vastly more savage) relative of the Goblin. Named for their wide, bear-like noses and short tempers, they doubtless originate from the wily goblin stock but have grown larger and hairier than their diminuitive brethren, forming a truly barbaric culture with a hierarchy established by brute strength. Standing just taller than a man, with thick skin and an umatched eagerness for fighting, the Bugbear is not a creature to be underestimated, especially in numbers.

Alas! Animations still aren't finished so here are some drawings that don't move to tide you over. I feel like this owes a lot to Tengen Toppa Gurren Lagann, not just in the colour but with the approach to linework and shading. Personally, I think anime is a great thing to take inspiration from sometimes, but like any other media you have to pick and choose your sources. Everyone's seen a few Ghibli movies by now, but there's other stuff out there worth looking at, and even if you don't like it, it can be inspirational in its wackiness. Just my two cents, anyway.

See you next week with animations!
Posted by Joe Sparrow at 12:58