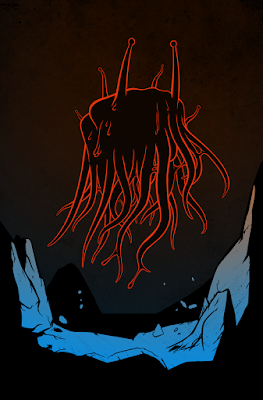 Creatures of the "Ooze" type are often physically primitive - posessing little in the way of defined organs and rarely maintaining a constant form for any period of time, their bodies are simple, gelatinous masses of chaotic magical tissue.

Void Oozes have no specific origin but "occur" naturally across the planes. They are manifestations of negative energy, the anti-life force which is tapped by magic users such as necromancers who use it to power their spells. As such, a Void Ooze is often found in areas devoid of life, occasionally accompanied by smaller undead who are drawn to the negative magics it excretes as a dark penumbra.

This week's theme was designed to pose a challenge - how do you make a drawing of a formless blob interesting? I enjoyed drawing the Void Ooze, as its appearance bears no small resemblance to a certain Flying Spaghetti Monster. Lighting in in a suitably "negative" way was also fun.
Posted by Joe Sparrow at 17:25