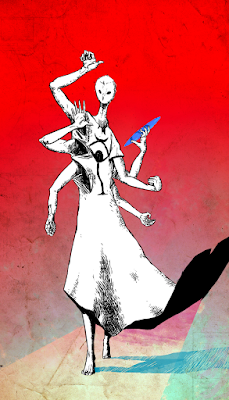 Spell weavers are enigmatic creatures, encountered alone if encountered at all. Gaunt, six-armed humanoids with owl-like features, they neither speak nor express any visible emotion, whether to humans or (apparently) their own kind. They are known to collect and steal magical artefacts, "raiding" bands of adventurers for a particular magical trinket. Physically weak, they are as dextrous as they appear, having the uncommon ability to cast six spells at once, one with each arm.

Two interesting characteristics are shared by all Spell Weavers: firstly they all carry a small disc, about a handspan across, which pulses with a variety of colours. As far as non-Spell Weavers have been able to discern, this is some sort of spell-casting device, further boosting the creature's already formidable magical ability.

Secondly, Spell Weavers have a bizarre tendency to leave notes behind for their victims to read - more often than not these are rambling streams of gibberish, and answer no questions about the creatures' motives.

Spell Weavers are some of my favourite creatures ever! I have a fascination with owls' faces and a soft spot for spellcasters. With hindsight the robe here reminds me more than a little of this... uh-oh...
Posted by Joe Sparrow at 10:30